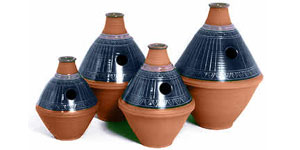 The UBANG is an adaptation of the Udu, a traditional African Clay Pot Drum. It has been redesigned by providing a flatter playing surface for the shell of the drum while keeping the traditional side and top sound holes.

The UBANG is available in four full sizes and a mini. The full-sized drums are approximately tuned to the keys of A,E,D and low C in the sustained note in order of smallest to the largest. The upnote is one fifth up from the sustained note for each drum. Each one is intricately carved with various designs, and is signed and dated by the drum maker.